The Worst Food You Can Eat On A Fat Loss Journey

It's obviously going to be Indian food, isn't it?

Indian food has to be terrible for you if you want to achieve your goals.

All the oils and the carbs, what a recipe for disaster.

One element of this is just a massive misunderstanding people have with nutrition, which is cool.

But I still see people that should know better espousing this belief that we should be eating this boring, bland and dry food because somehow through not enjoying your food you are more likely to get to your goal quicker.

If I am frank, I am annoyed that people still think the foods we as a culture, have been eating for generations is somehow the cause of weight gain or it's stopping us from moving forwards towards our goal of weight loss.

So let's look at three things that people say about Indian food that inherently isn’t true.

1. Indian food is full of fat and carbs.

Yeah, no! this is inherently untrue. I am going to give you a dish right now that we eat commonly:

Here’s a little saag, roti and dahi, it is calculated as a normal portion for what an individual should be eating.

This is an example of exactly what it looks like if we break this meal down into numbers.

Within the E.U., the European Commission consider a product labeled as or 'claims' to be a source of protein must contain at least 12% and a high-protein product.

So this meal hits that goal and thats before I have made any tweaks to the recipe to make it even more nutritious. 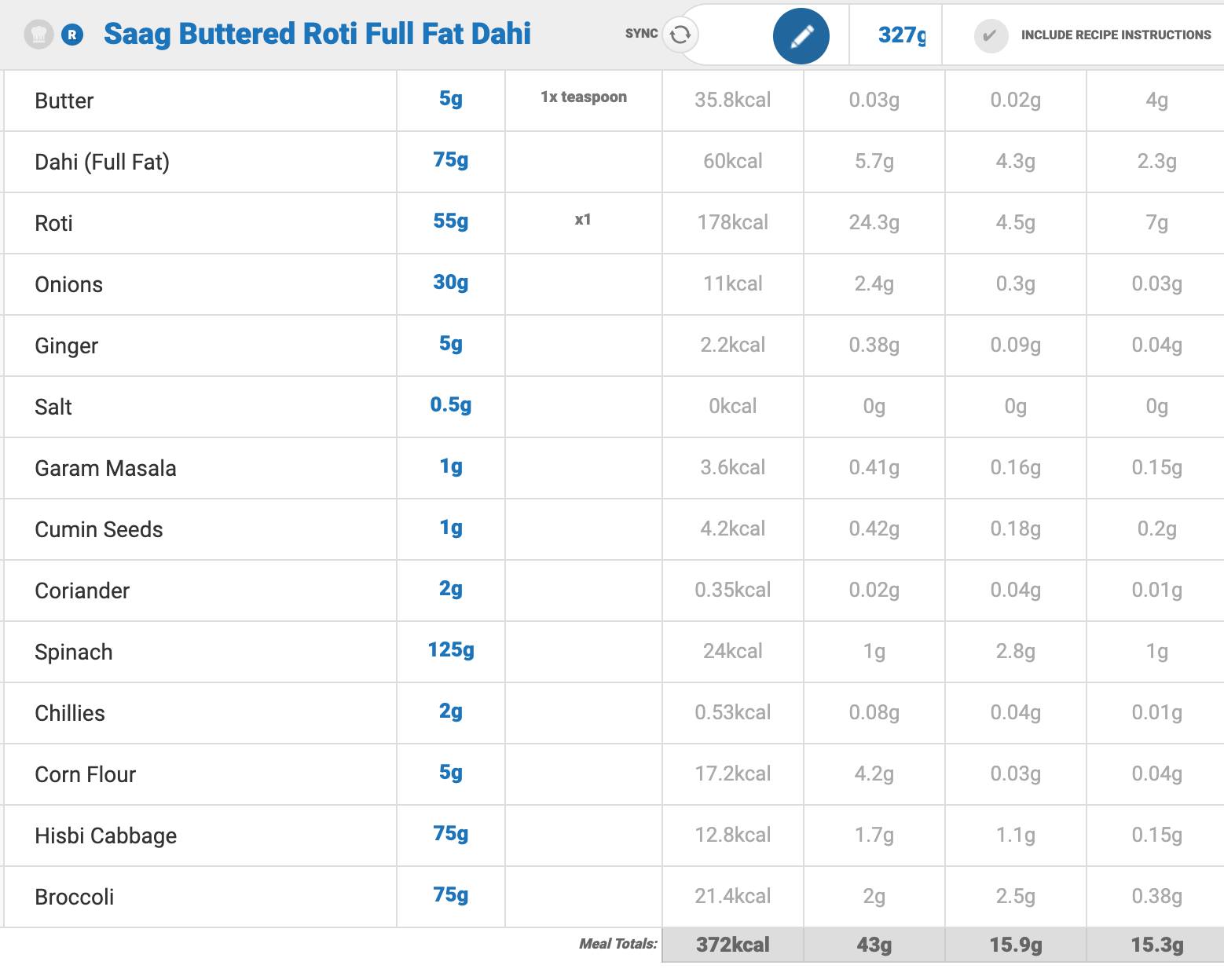 Here is the same meal but with a few game changing Indian body coach tweaks.

Added a little Apetina Paneer to it, low fat and high in protein.

Changed the Dahi to low fat greek yoghurt instead of traditional natural yoghurt and I didn’t butter the roti.

Now the meal is 33.8% protein, still the same food, minor adjustments but clearly the myth that indian food is just carbs and fat and inherently unhealthy has just been dispelled!

There is something very important to note here which I will discuss further in point 3 today! 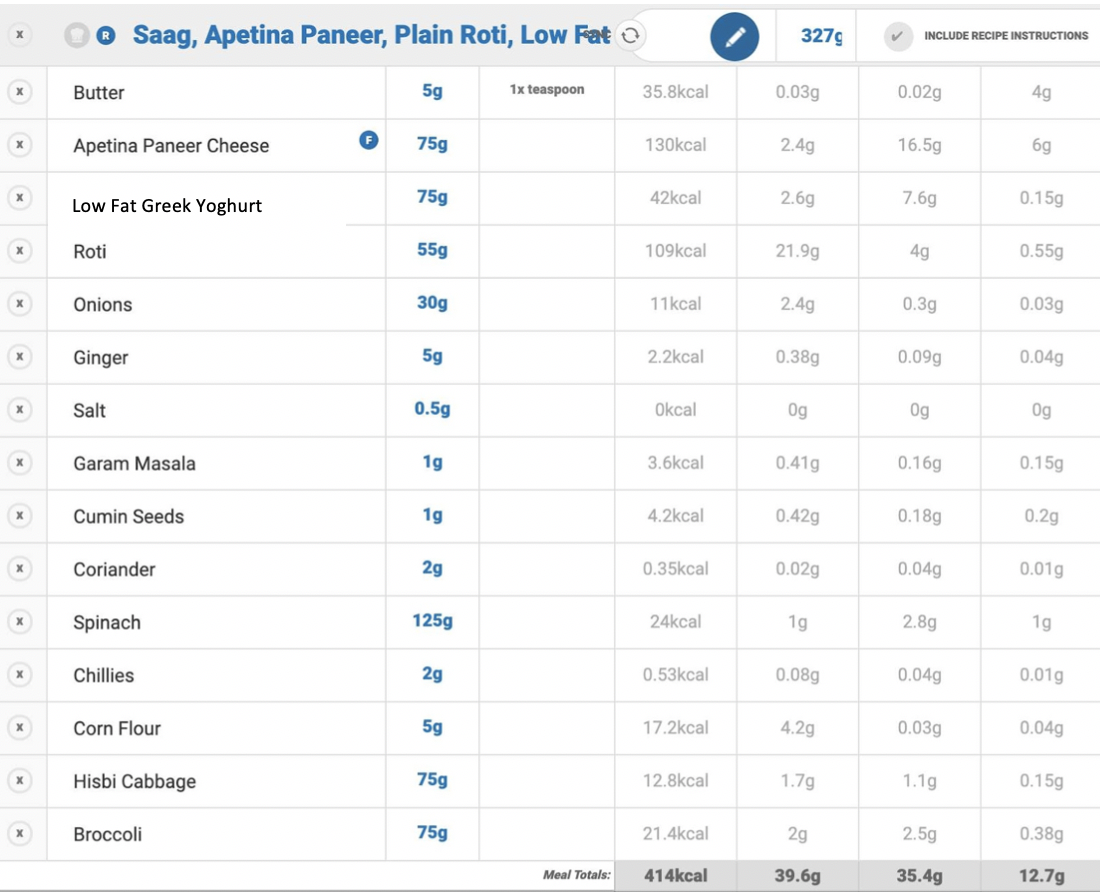 2. I cut roti out of my diet and have healthier carbs instead.

What does that even mean?

I usually get the response, well Roti itself is high carbs, “carb heavy” and I need to switch that up to something healthier.

So out of interest what are you switching that to which is “healthier”?

Ah, I have sweet potato, its much better for you.

I have rice, it's healthier than roti.

Lets just look at the numbers. 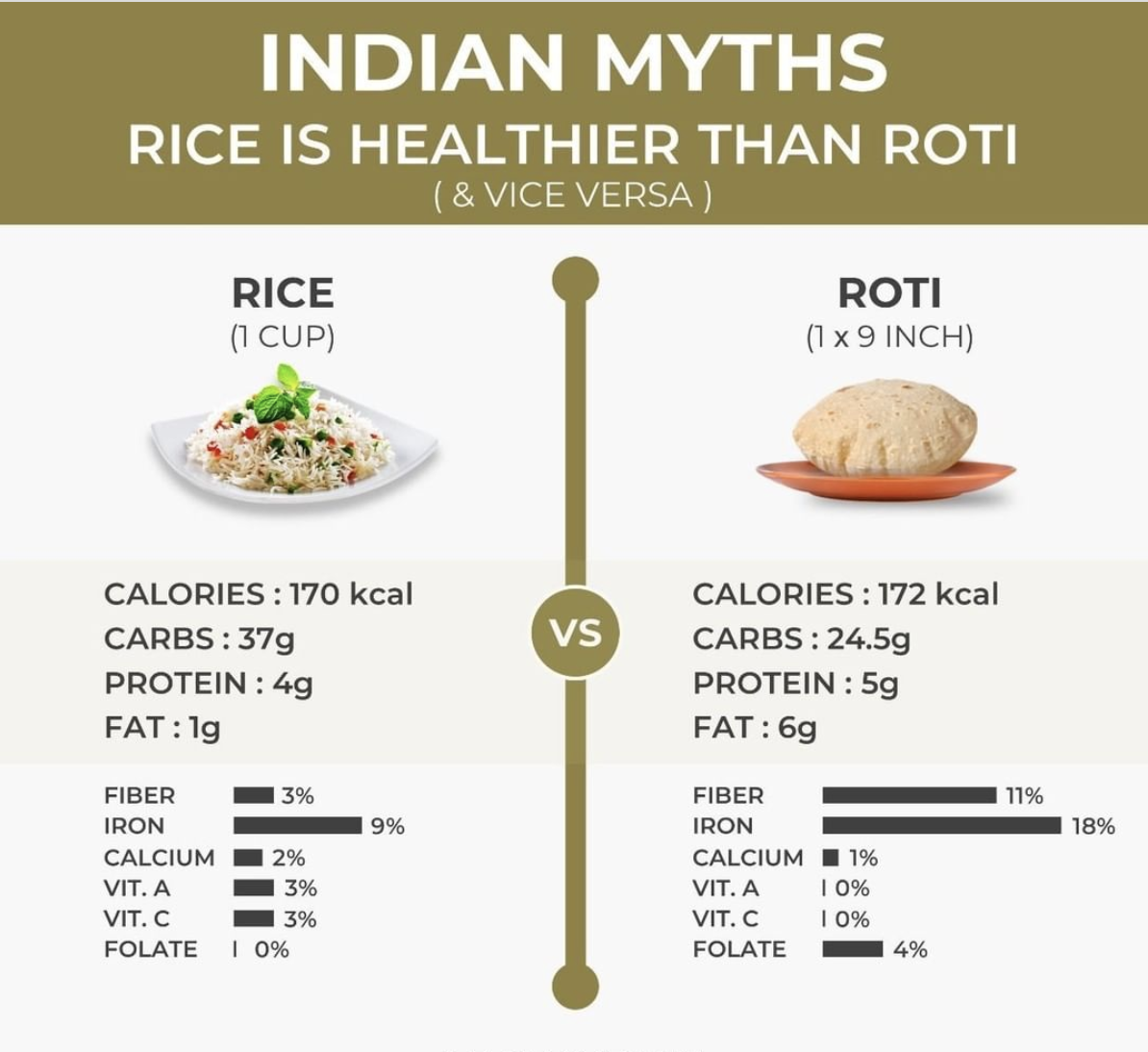 Ahhh but fat is fattening.

Over consuming calories in general is fattening.

But what type of flour is that? Is it some special flour you are using that is healthier? 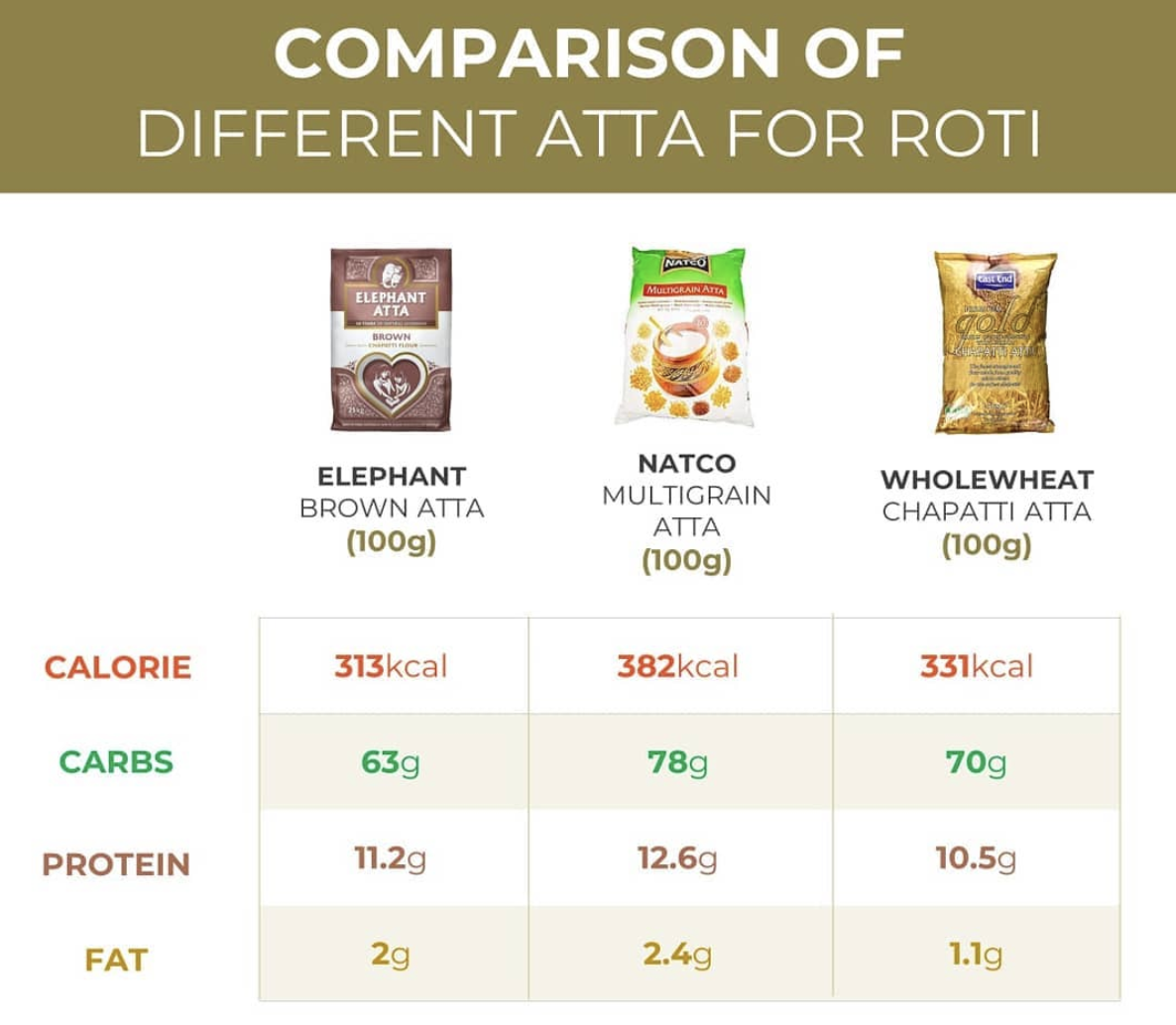 Use any of these flours, they aren’t massively different from one another… 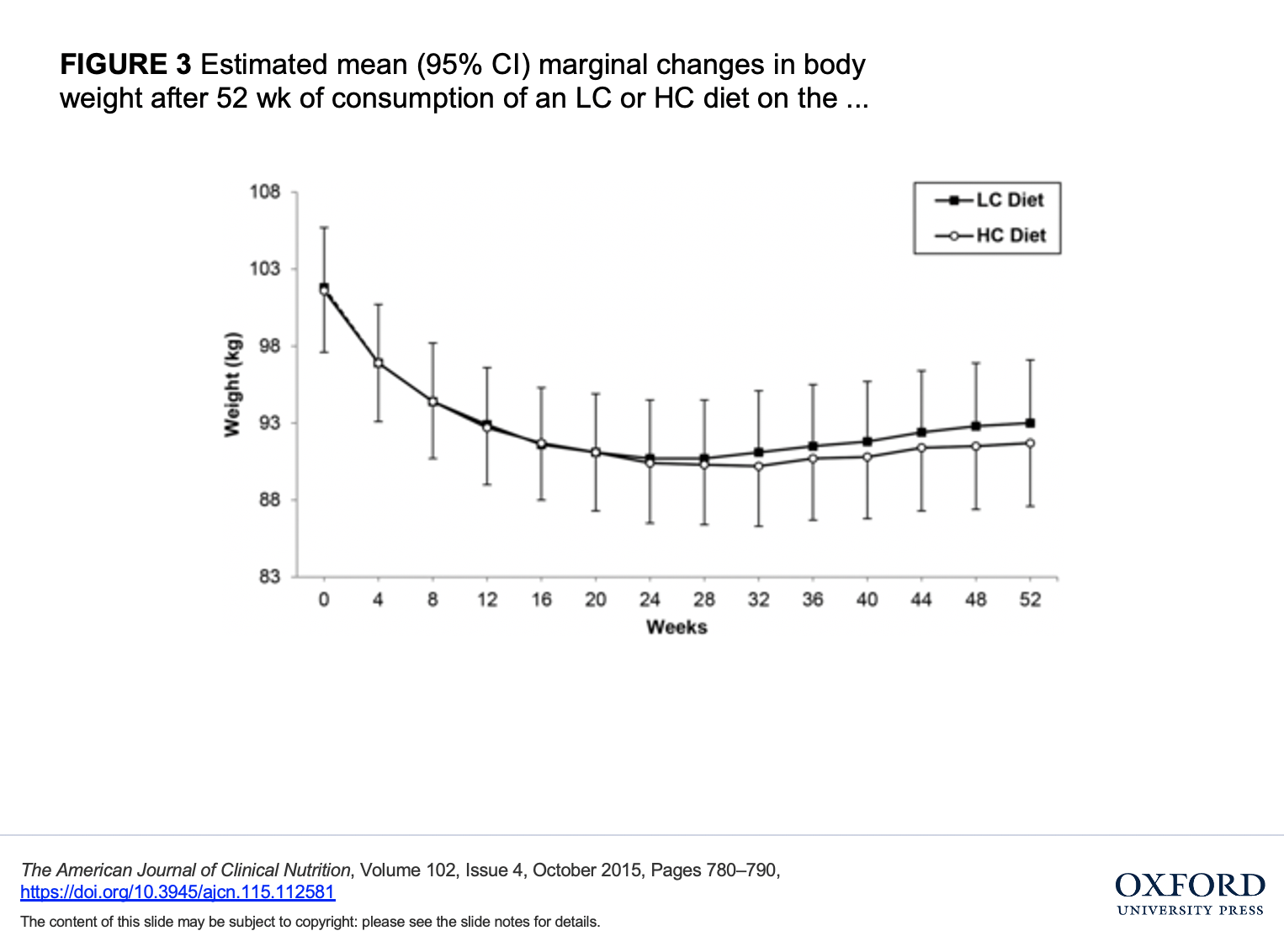 Let me read a quote from this paper: “In the current study, diets were isocalorically prescribed and achieved comparable weight loss, which suggested that the caloric deficit, independent of the macronutrient composition, is the primary determinant of weight loss.”

So, in english, it's not the carbs or the fat content of your diet that will help you lose fat, its dependant on the total calories consumed and if you are in fact in a calorie deficit that matters if your goal is long term fat loss.

Also, complex carbs aka sweet potato and roti, they are both broken down through digestion into its simplest form, i.e. both get turned into glucose. 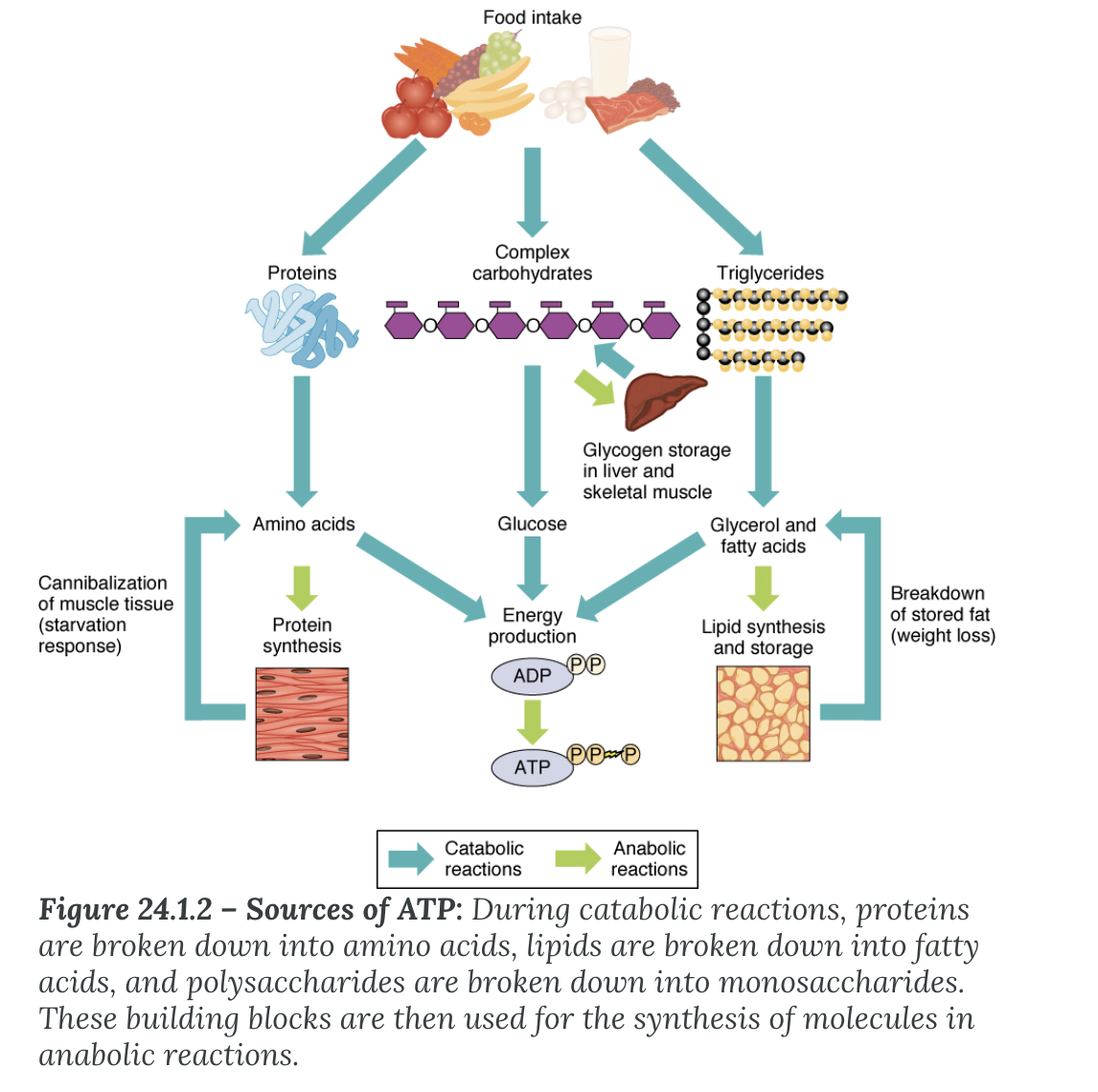 Once it has been turned to glucose, it will either be used by the muscle or brain, stored for later use or used in the production of DNA or RNA which we don’t need to get into.

So, in essence, you don’t need to cut roti out of your diet unless you want to needlessly punish yourself and make visiting family unnecessarily awkward.

3. I have to avoid eating at family occasions or celebrations as the food isn’t consistent with my goal.

I get it, I know where you are coming from when you say this, but lets look at a typical intake at a wedding reception.

So knowing that the total calorie intake will influence weight loss the most as discussed earlier, if you didn’t eat a great deal else that day or had a light brunch, then many of you would still be able to create a total daily deficit at this point.

But here is the key, your portion sizes matter.

The main reason Indian food has been touted as “bad” is that it tastes so good and with anything that tastes good you want more of it.

But when you understand your unique portion sizes and what a plate of food should look like, then you realise that its not the type of dish thats unhealthy its the choices you have been making.

A simple hack at a celebration to stay in your calorie deficit would be to either reduce your portion sizes per dish, so slightly less starters, mains and desserts… yes that means maybe not devouring everything on the plate. Or to skip one of the dishes, i.e. only have starters and mains or mains and desserts.

Ultimately the food is fine, its your mindset that will change the game for you here!

I hope this has helped you clear a few myths from your mind and find peace in the fact we don’t have to turn our back on our culture, on the foods we love and ejoy, the foods that are an integral part of our family life just because we want to drop a few pounds.

Now, I hope you can use this information to prove the doubters wrong, just as so many of my clients have (client transformation flip book).

Break the cycle and change the narrative towards your weight loss journey today, enjoy you foods so you don’t feel overly restricted all of the time to improve adherence and stay consistent!